Fishkill Correctional Facility is one of the older state-run facilities and required a modernization to its 15,000 volt distribution and standby power systems. Because the facility has medium to high security buildings, attention was required to the transition from the existing service to the new service without disrupting the power required to contain the inmates. LynStaar achieved this through coordination with the facility by phasing each building’s transition to coincide with daily operations when inmates are in other buildings attending to their daily activities.

A new standby power system consisting of three 1250 kw generators and one 1750 kw portable generator was required. It was agreed by LynStaar, the facility personnel and the state administrators that a prefabricated building be provided with the generators for sole source responsibility and coordination to minimize startup issues and equipment clearances.

Of particular interest was how to become aware of a utility outage since there were existing microturbines which were independently providing power on the same distribution system. Coordination with the utility company was performed so that their equipment could signal the standby power system indicating there was an outage and to start the generators.

LynStaar has performed many studies and design work for this complex including the upgrade of various buildings and is currently designing the new cell blocks with full emergency generator back-up. 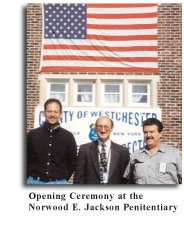 Westchester County Department of Public Works/Environmental Facilities: This project consisted of the design of two (2) new buildings with two (2) 500 kw generators and one 300 kw generator. Also included in this project was the modification of the security, public address and emergency power to four (4) existing cell blocks. Responsibilities included design of the normal and emergency power.